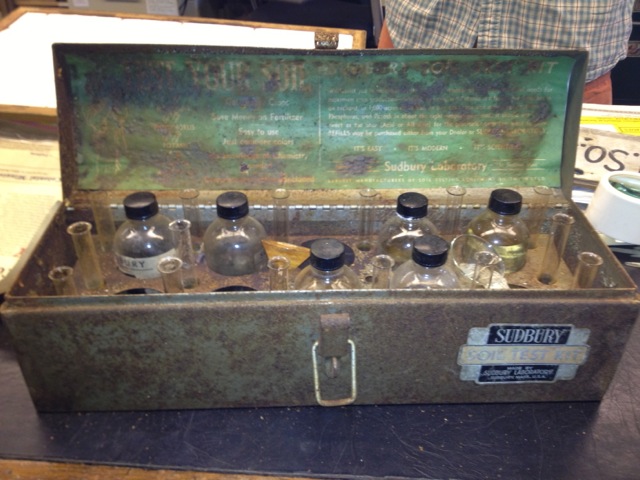 It’s been decades since Sudbury Foundation founder Herb Atkinson’s company, the Sudbury Laboratory, stopped making its popular Sudbury Soil Test Kits. Mr. Atkinson developed the kits based on formulas created by agronomists at the University of Massachusetts. He and his wife – and later a bevy of employees – made, assembled, marketed and shipped the kits from their home on Dutton Road in Sudbury, the former residence of Babe Ruth.

The kits identify deficiencies in lime, nitrogen, phosphorus and potash then explain how to blend the correct balance of fertilizers to improve growing.

After the company was sold in the late 1970s, the kits were reportedly produced under another name but what happened to them from there is a bit of a mystery.

What isn’t a mystery is the fervent loyalty the product has garnered. Nary a year goes by that Sudbury Foundation staff don’t get a frantic email, phone call or letter from around the world asking where the kits can be purchased. Apparently, years later, the chemicals still work and are in demand.

Now there’s a link to Hurricane Sandy. Recently the Sudbury Historical Society (SHS) received a phone call from Bryan Alfier of Middleton, NJ who discovered a kit in the ravages of Belford. NJ. The 18-inch steel “toolbox-style” kit was lying on the sidewalk outside the remains of a house flattened by Sandy, where clean-up crews had stored trash and debris for removal. Mr. Alfier did a little sleuthing and contacted the Historical Society to see if the folks there wanted it for their archives. They did, and the gentleman kindly shipped the kit to Sudbury. It arrived a little rusty, with a few broken bottles and about a pound of sand in it. SHS staff cleaned it up and is preparing to accession it for their collection, which now includes five different versions of the popular test kit.

An interesting piece of Sudbury history that survived a super storm.