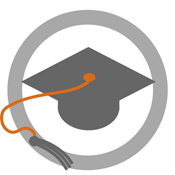 Atkinson Scholarship Applications are due on February 1, 2019. The program is open to graduating seniors at Lincoln-Sudbury Regional High School and the dependents of Town of Sudbury and School Department employees who attend other high schools.

The program offers eligible students a maximum of $5,000 per year in scholarship assistance for approved post-secondary or vocational training.

Candidates must first meet a certain threshold of financial need. Applicants are then selected based on past academic performance and future potential as well as the desire and ability to contribute to society through community service, the advancement of a field of interest, or the sharing of a skill or talent. Course grades, standardized test scores, involvement in school and community activities, work experience, letters of recommendation, and a written essay will be considered in the recipient selection process. Semi-finalists are invited for a personal interview. Up to 15 new awards are made each year. Scholarship recipients may reapply for the Atkinson Scholarship annually during their undergraduate education. Subsequent awards are based on appropriate academic performance and continued financial need.

Should you apply? Take a look at our Frequently Asked Questions. 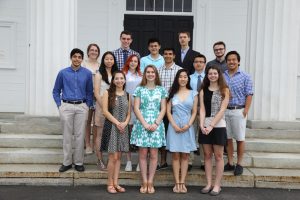 The Sudbury Foundation recently awarded Atkinson Scholarships to 15 outstanding high school seniors, honoring them and their families at a breakfast reception held at the Grange Hall in May.

The Atkinson Scholarship Program was established in 1996 to recognize local students with financial need, academic promise and the capacity to make a meaningful contribution to society.

The 2018 Atkinson Scholarship recipients include:

These students were selected because they embody the qualities valued by former Sudbury residents Herbert and Esther Atkinson, who established the Foundation in 1952 and for whom the scholarship is named.

“The Atkinsons were a modest couple who believed in private giving for the public good,” said Executive Director Marilyn Martino. “They were particularly interested in helping young people attend college. This year’s recipients were selected because of the promise they showed us through the rigorous application and the interview process. We are delighted to welcome them into the Atkinson program and are pleased to entrust them with the Atkinsons’ legacy.”

In recognizing the students, Sudbury Foundation Trustees Jill Stansky, Susan Iuliano, Stephen Richmond, and staff member Tricia Brunner noted their many contributions, both in and out of school, including a host of community service and leadership activities and initiatives.

“It goes without saying that they are all hard-working, diligent students who value education and the opportunities they’ve been afforded,” Iuliano said. “But beyond that, they are caring citizens who are poised to make a difference in the world.”

Photo courtesy of Photos by Paige.

Financial aid offers are not all alike. Here’s some good advice from a college senior and intern at the U.S. Department of Education’s Federal Student Aid office on how to read and compare aid packages before you decide which school to attend.

It’s worth a look: 4 Steps to Understanding and Comparing Financial Aid. 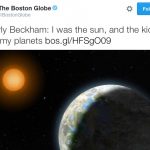 Beverly Beckham’s wonderful 2006 Boston Globe essay on sending a child off to college remains true and heartfelt today. The Globe reprints it around this time every year. If you’re a parent who has just dropped your Freshman off at school, pull out your hankie. It’s worth reading: http://bit.ly/2bsy8St

We enjoyed reading a recent thread on the “I Grew Up in Sudbury” Facebook page acknowledging the generosity of Herbert & Esther Atkinson who started the Sudbury Foundation in 1952. Those posting commented on how that generosity shaped the lives of many, particularly through the college loan and Atkinson Scholarship Program.

While we at the Foundation think often of the Atkinsons as we consider each funding decision, it occurs to us that we should keep reminding our community of the character of the couple who made it all possible. With that in mind, we’re re-posting the Atkinson’s simple but inspiring “story” here. It was written by long-time Trustee John Taft in 2002 as part of his charming history of the Foundation entitled “The Sudbury Foundation: Gift of Herbert and Esther Atkinson.”

Herbert J. Atkinson and Esther M. Peterson were born and raised in Washington state: he in 1894 in Seattle, she in 1887 in Spokane.  They both learned early on to take care of themselves: his parents (Fred Atkinson and Lottie Fleming) were divorced in his youth, her parents died before she reached her majority, and she lived with a family named Collins in Seattle while attending school.  Herb studied for a career in insurance and marketing at the University of Washington.  At that time he met petite Esther and they were married.  Esther was his partner in his early adventures and plans and remained his partner in all his activities through fifty years of a happily married life.

At an early age, Herb became interested in boats and automobiles, avocations that continued throughout his life.  He had a boat while at the University, and his knowledge and interest in cars included dismantling and rebuilding and tinkering with motors and other parts.

Early in their marriage, Herb and Esther moved to Denver, Colorado.  There was sailing and boating to be had on the lakes around Denver, and his collection of large cars at one time or another included Franklins, Pierce Arrows and Rolls Royces.  One of the latter he kept and eventually brought to Sudbury.

Herb developed an interest in the Sundstrand Adding Machine, became associated with this company, and was responsible for an improvement in this machine.  At about this time (the early twenties), business took Herb to Boston and he decided he liked the area, the people, and the boating opportunities.  At first the couple lived on the North Shore, but in 1928 they found and bought a 100-plus acre farm in Sudbury, the old Perry Homestead.  The house was a 19th century colonial with two separate buildings for keeping sheep, chickens and horses and other farm uses.  In the early 1920’s, this property had belonged to Babe Ruth and his wife, who added on the two large wings.

Around 1931, Herb was introduced to the concept of testing the soil to determine if the pH was within the proper range for crops to grow and whether there was adequate nitrogen, phosphorus and potassium.  The chemical formulas for making the four test solutions had been developed by agronomists at the University of Massachusetts, which made it possible for individuals to prepare their own test kit at home.  Herb and Esther did just that, buying metal boxes, glass bottles, and chemicals, mixing the solutions and packaging them with instructions in their own kitchen.  He sold the first ones to greenhouse operators and farmers in the area.  Paul Rhodes of Sudbury, a horticulturist and landscape designer, assisted Herb in the early days.

Herb was always a student of marketing, and he worked tirelessly on the distribution end of their Sudbury Laboratory soil-test kit products.  The office was in the large east wing of their house, and Esther was the original office workforce.  Herb really made the soil-test kits go.  He remodeled the barn, moved his office and lab to this building and began to expand, later moving the manufacturing operation to the old chicken house.  Herb was a successful businessman.  Today we would call him an entrepreneur.

He and Esther were traveling literally around the world, and more than just once.  They took keen interest in the sights and the people of the countries they visited.

Herb and Esther had no children, but they had a genuine affection for the youth of Sudbury, especially those who were making the effort to complete their education but needed additional financial support.  As Harry Bayliss, their banker, put it: “Herb was a man who was always helping other people help themselves.  He took pride in the community he lived in.”  Herb and Esther had no close relatives and they were beginning to amass some wealth.  The stage was set for them in 1952 to found and fund The Sudbury Foundation.  They must have planned from that point on to will all their worldly wealth to the Foundation.

Herb died on October 4, 1966 at age 72. Esther died on September 4, 1973 in Sudbury at age 86. Herb and Esther are both buried in the Town cemetery in Sudbury by a simple but lovely native stone from the farm where they lived full lives together.

Note: Mr. Taft passed away in 2010. He is honored each year with a scholarship in his name through the Lincoln-Sudbury Scholarship Fund. 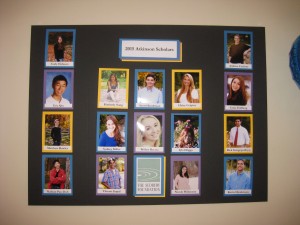 We were delighted to host our newest Atkinson recipients, their families and invited guests at our annual recognition breakfast on Friday, May 1, 2015.

The reception, held in our Community Meeting Room at the Grange Hall, recognized the following students: 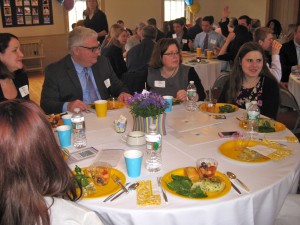 residents Herbert and Esther Atkinson, who established the Foundation in 1952 and for whom the scholarship is named.

“The Atkinson were a modest couple who believed in private giving for the public good,” said Executive Director Marilyn Martino. “Their generosity has helped more than 300 students attend college since the program began in 1996. We are delighted to welcome the latest group of bright, talented students into the Atkinson program and are pleased to entrust them with the Atkinsons’ legacy.”

the students, Sudbury Foundation Trustees Sharon Driscoll, Jill Stansky and Susan Iuliano, and staff member Tricia Brunner noted their many contributions, both in and out of school, including a host of community service and leadership activities and initiatives. “These are truly remarkable citizens and we have great expectations for what they will accomplish in the future,” Driscoll said.

Atkinson Scholarship recipients receive $5,000 in scholarship assistance and an opportunity to reapply for aid each year of their undergraduate academic career.

During the first half of 2021, we have been pleased to support these nonprofit organizations who contribute so much to our … END_OF_DOCUMENT_TOKEN_TO_BE_REPLACED

As we continue to navigate our way through the COVID-19 pandemic, we are re-opening our Children, Youth & Families … END_OF_DOCUMENT_TOKEN_TO_BE_REPLACED